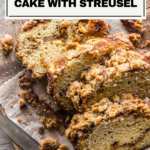 This homemade Cinnamon Swirl Loaf Cake is an easy quick bread recipe that's moist and tender with a big cinnamon sugar swirl and topped with the most perfectly crunchy streusel.

Pretty staple baking ingredients are used to make this cinnamon cake – check them out below.

This easy cinnamon swirl quickbread comes together in a few straightforward steps.

2. Add the rest of the wet ingredients. To the mixing bowl add the greek yogurt, vanilla extract, and canola oil.

3. Add the dry ingredients. To the wet mixture, add the all purpose flour, baking powder, cinnamon, and salt. Whisk until just combined.

4. Make the cinnamon-sugar mixture. In a small bowl combine the granulated sugar and cinnamon.

5. Assemble. To a prepared loaf pan (lined, greased), pour half of the batter and spread into an even layer. Then sprinkle ¾ of the cinnamon sugar on top. Using a knife or offset spatula, gently swirl the cinnamon sugar filling into the bottom layer of batter without fully mixing them together. Top with the remaining batter and sprinkle the remaining cinnamon mixture over top.

6. Make the streusel. Combine the melted butter, sugars, flour, cinnamon, and salt. Sprinkle in an even layer over the top of the loaf.

7. Bake. 350F for 50-60 minutes until deeply golden. Baking time may vary depending on your oven.

Tips below on how to store and reheat this cinnamon swirl loaf cake.

This cinnamon swirl bread is great recipe any way you slice it, and is perfect for breakfast or a dessert.

Serve alongside an extravagant breakfast with eggs, fruit, and bacon. Or as a quick slice with a cup of morning coffee.

For dessert, it's simply a perfect cake on its own along side coffee or tea!

What’s the difference between a cake and a loaf?

How do I line a loaf pan?

I usually spray with non-stick spray, then do one long strip of parchment paper along the wide side of the pan with at least 1 inch of overhang. This is the one I use.

Can I make this in a different pan?

Did you make this recipe? Leave a rating and review below and tag me on social! 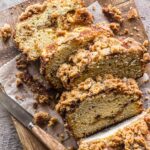