This super easy loaded twice baked potatoes recipe is going to quickly become a favorite. Crispy potato skins filled with creamy mashed potatoes all topped with melty cheese, crisp bacon, green onions, and sour cream. All the best things a loaded baked potato has to offer. Perfect for an appetizer, side dish, and game day.

HOW TO MAKE THIS RECIPE:

There are a few loaded baked potato toppings that are key and non-negotiable in my opinion – sour cream, bacon, and green onions. Some others that you could add:

OTHER APPETIZER & SIDE DISH RECIPES: 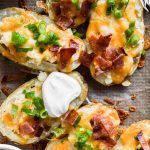