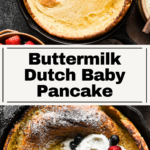 This Fluffy Buttermilk Dutch Baby Pancake is an incredibly easy and hands-off breakfast or brunch recipe with a custardy center and crispy edges. Simply blend together the ingredients, melt some butter, and bake. So versatile you can top with any of your favorite fruits, whipped cream, powdered sugar, or all three.

This buttermilk cast iron dutch baby is probably one of the easiest recipes you'll ever make but it's definitely not lacking in flavor. Details below!

2. Blend. Blend the batter together until well combined and and little bubbles have formed (which means it's gotten enough air in it).

4. Add the batter. Pour the batter into the skillet with the melted butter.

5. Bake. Bake for 25 minutes until golden and puffed. Do not open the oven or the dutch baby will deflate!

6. Add toppings. Add whipped cream, berries, and a dusting of powdered sugar (or whatever toppings you want!).

There are really SO many ways you can top and serve dutch babies, and all are equally as delicious.

Origins of the dutch baby

A dutch baby, more classically referred to as a german pancake, bismarck, dutch puff, puffed pancake, or baked pancake, originated from the German Pfannkuchen. They first popped up in the US in the 1900s in Seattle at Manca's Diner.

The term "dutch baby" is said to have been created by Manca's daughter, and is derived from Deutsche, the English autonym for Germans. More on it here!

How do I store a dutch baby?

It's easiest stored cutting it into slides then storing in an air-tight container in the fridge.

How do I reheat it?

Can I prep this in advance?

This one is so simple, I recommend doing all the steps at the time that you're going to cook it. If you let the batter sit for too long it will lose some of the air we blended into it and might not rise as well. It's also best for the batter to be closer to room temperature than chilled.

What's the difference between a dutch baby and a pancake?

Simply, a dutch baby is one large pancake that is baked. Whereas pancakes are a few inches in diameter and cooked separately on the stovetop. Pancakes are also flipped in the cooking process, while dutch babies are not.

What makes a dutch baby rise?

Two things - the air in the batter, and the quick heat in the oven. Which is why it's important to pre-melt the butter (and in turn preheat the pan) and keep the door to the oven closed.

It tastes mostly like a pancake! If you add other spices/zest/etc. it'll alter the taste, but the base is most similar to a classic pancake. 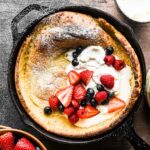 This Fluffy Buttermilk Dutch Baby Pancake is an incredibly easy and hands-off breakfast or brunch recipe with a custardy center and crispy edges. Simply blend together the ingredients, melt some butter, and bake. So versatile you can top with any of your favorite fruits, whipped cream, powdered sugar, or all three.
5 from 1 vote
Prep time: 5 mins
Cook time: 25 mins
Total time: 30 mins
Yield: 4 servings
Prevent your screen from going dark